43, filmmaker, TV presenter and chef, on “date night”, disengaging from social media, and his desire to return to the barter system.

The thing I love most about living in Cape Town is the fact that the great outdoors is pretty much in my backyard. We have the Atlantic and Indian Oceans on either side, and the mountains. Besides the fact that it’s probably the most beautiful city in the country…

When out-of-towners come to town, I take them to the winelands for a picnic lunch, up the mountain, down the mountain, to the beach, to Witsand on the way to Scarborough to pick mussels, Mzoli’s in Gugs, or to one of the city’s farmers’ markets. There’s such natural beauty, making it so easy and accessible to do loads of A-grade stuff.

I always have a hard time choosing my favourite restaurant, but two stand out. The first is my good friend Bertus Basson’s restaurant, Overture, in Stellenbosch on the Hidden Valley Wine Estate. I know I’ll never be let down by the food he creates – especially now that a lot of his dishes are braai-inspired. The second? I will never turn down an experience at The Foodbarn, whether it’s for tapas with Pete and Kim, or for Franck Dangereux’s à la carte menu.

Another favourite that sits very firmly in my heart is Magica Roma in Pinelands. The food is superb and I’ve become great friends with Franco and Ezio. A restaurant doesn’t just stay open for more than 20 years in Cape Town, South Africa, or anywhere in the world unless it’s something special. Try the spaghetti vongole!

I’m looking forward to eating at The Hog House – It’s not open yet, but will be the creation of chef PJ Vadas (ex-Camphors at Vergelegen).

An annual Cape Town event you’ll always find me at is the potjiekos cook-off in Noordhoek Village. Sadly, I won’t be doing it this year, as I’m attending a braai festival in Riversdale that will hopefully help me get my chosen charity a car.

Twitter? I’m slowly disengaging myself from all social media at the moment. I’m suffering from stimulation pollution – there’s just too much unnecessary noise. I can’t cope with the volume of stuff coming through every day.

My favourite TV series is Utopia. Three months ago I would have said Game of Thrones. There’s also an overload of people who really just shouldn’t be on television. Stuff like “child star dancers and their mothers”! It just boggles my mind.

My favourite weekend getaway is the same as it’s been for the past 20 years – Breede River. This is where I go to switch off, just two-and-a-half hours from Cape Town.

On my bucket list is to see a movie with my wife in a cinema. I can’t even tell you the last time I went to a movie house to see a movie; I have an eight-month- old daughter, a three-year-old son and a teenager. It is high up on my wife and my agenda for that “date night” if and when it arrives. I’d also love to go skiing in the mountains near Cape Town. Other than that, I have pretty much done everything that I wanted to do in the Cape.

My best coffee spot is the Empire Café just around the corner from me. I love a place that’s owned and run by a real person, in this case Dave Jones, and not some corporation.

There are so many amazing walks in the Cape. We’re lucky enough to live in Noordhoek, where there are dozens of walks to choose from: up into Silvermine, across to Hout Bay or Constantia. Even just walking along Noordhoek Beach with the dogs is a treat. We’re very fortunate.

A good red wine for a special occasion is Roodeberg.

I’m currently reading Michael Pollan’s Cooked. I love the fact that the evolution of our species can be tracked to our ability to cook food sources that other animals couldn’t access. It kind of makes sense as to why we’re so enthralled with the fire.

On Sundays I count the final 12 hours left of the weekend. And then I watch Carte Blanche and the movie that follows. Then I reminisce about the weekend that flew by, and realise that I have to count down 120 hours until the next one.

Money is a necessary evil. I wish we didn’t need it. Can’t we go back to the barter system?

Straight after this I’m going home to hang out with my kids. The terrible thing about the way we live at the moment is that I only get to be a dad for two to three hours an evening during the week, so I have to try and shoehorn in as much time as possible with them over the weekends.

When I wake up in the middle of the night it’s normally because the “not done” things on my to-do list are running through my head. The only way I’ve learned to deal with them is to write them down. Or to get up and deal with them straight away, so I can go back to sleep.

One day I would like to have my own little piece of land far out from the city where I can sustain my family from the ground, and reduce my footprint on the planet completely.

Check out the cool stuff Justin and his team are busy with at cookedinafrica.com. 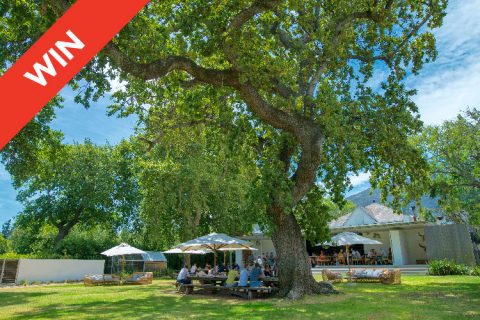 Kayak and Lilo on Storms River⁠ ⁠ These are ju

The banks of the gently flowing Olifants River are

Pop-up Beachside Bar in Hermanus If you’re in W