When in Franschhoek, do as the Romans do…

We should have known we were entering an Olympian Wonderland before we even arrived at Ludus Magnus. Named after an Ancient Roman gladiator training school, this five-star guesthouse beautifully positioned between Franschhoek, Stellenbosch and Paarl is home to an eye-watering array of cutting-edge amenities and activities all of which revealed themselves in the most charming of ways during a recent stay here.

The farm is owned by a French-Italian husband-and-wife team who bought the land a few years ago when they moved to Franschhoek from Europe and have been developing it – from scratch – ever since. Well-versed in luxury and hospitality, the couple still owns a Michelin-starred restaurant in Europe. 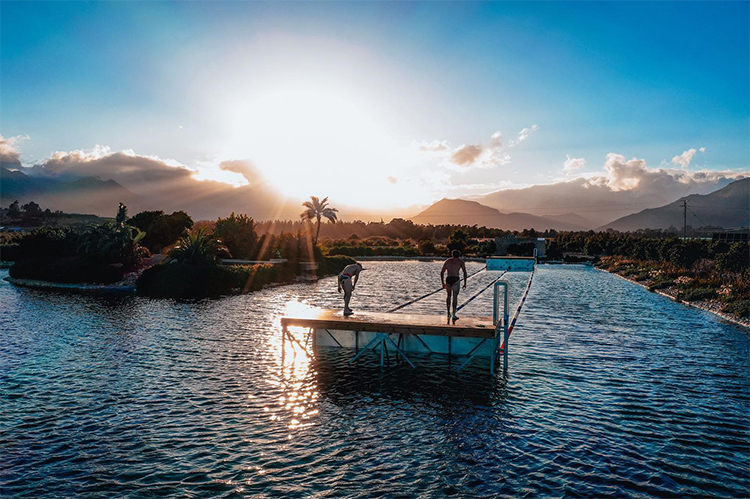 There are seven tidy and tastefully appointed en-suite rooms named after streets in Ancient Rome (and three two-bedroom luxury villas, with private pools, in the final stages of completion), a beautifully spacious reception area, and an upstairs dining room with beautiful views. It’s only when you happen upon the palm-tree-lined pool do you get an inkling that this is no ordinary resort… The pool is 25 metres long, with training lanes and, for those venturing beneath the surface, a series of serendipitous messages (courtesy of the owners’ 14-year-old daughter) stuck to the bottom that read: “Stay insane or go crazy”; “Think big”; “Never give up”; “Believe”; “Dream” and “Make today amazing”. 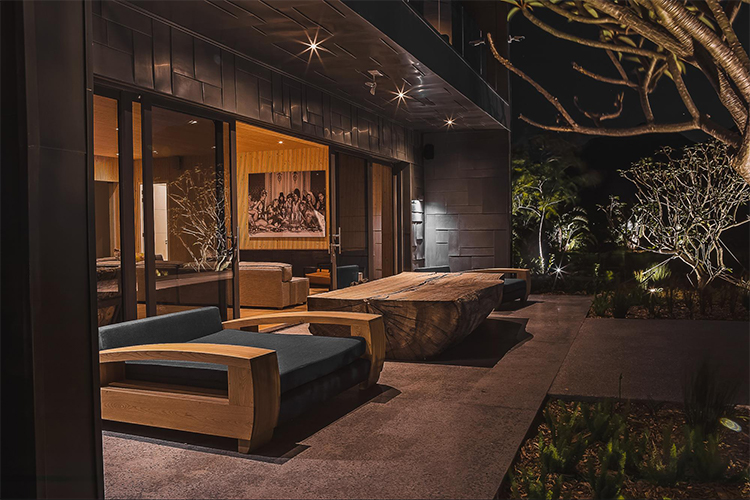 The Olympian theme continues with a 400-metre horse track, state-of-the-art sports field and a dam with 50-metre-long training lanes! Why, you might well ask? One of the owners was a professional athlete in his former life, and wanted to offer guests world-class facilities to train while on holiday. There’s even an altitude chamber in the pipeline!

Upon entering the reception area, a Bryan Habana-signed Springbok effigy greets you (the former World Cup star was one of Ludus’s first guests when it opened a few months ago and the family are clearly staunch Springbok supporters). There’s also a lone springbokkie living on the farm, in addition to two rescue donkeys – “I found them on the N2,” recalls the owner, “disease-ridden and emaciated, and could not leave them behind.”

The off-the-grid property is also planted with over 7 000 trees – a mix of plums, avocados, litchis, mangoes, pears, apples, grapes, bananas, macadamia nuts and olives – all of which were added by the couple when they arrived four years ago. There’s even a citrus grove – dubbed “The Vitamin C Trail” – with everything from lemons and limes, to grapefruits, naartjies, clementines and oranges. The aim is for the property to become completely self-sustaining. 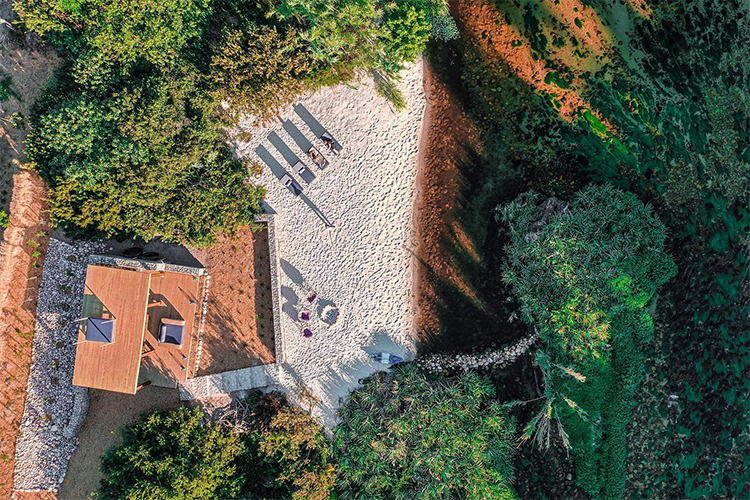 Should you feel like some beach time, a white-sand island – complete with a pizza oven, deck chairs, a tree-shaded hammock and rowboat – is the ideal spot to live out your Robinson Crusoe fantasies, followed by some 50-metre laps in the dam.

There’s even a river with white-water rapids – in the middle of Franschhoek, nog al – where the owners’ intrepid eight-year-old son took us on the most epic tubing adventure through the Vieux Riche Valley.

The whole is greater than the sum of its parts

To adapt a concept coined by Ancient Greek philosopher Aristotle, all of Ludus’ seemingly disparate parts – a five-star hotel, two rescue donkeys, 7 000 fruit trees, a springbokkie, 1.5 hectares of shiraz vineyards, a 400-metre running track, and so on – make complete and utter sense when you meet the makers. And not only that, all of the individual elements, while impressive in their own right, hang together so harmoniously, and together elevate the entire experience to an unforgettable stay. 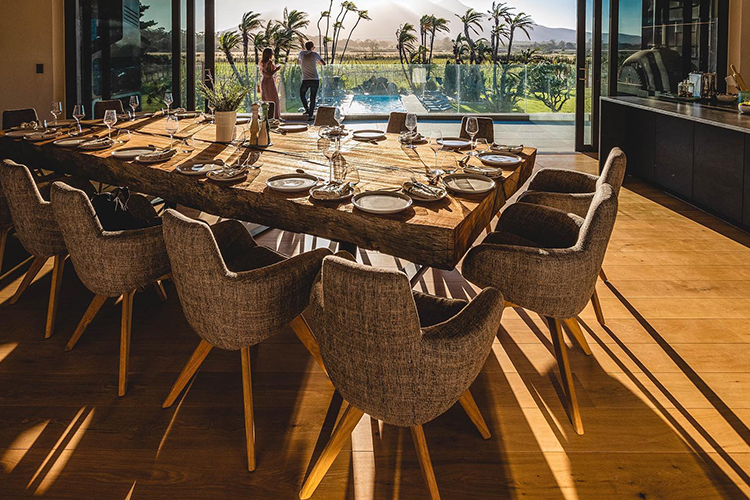 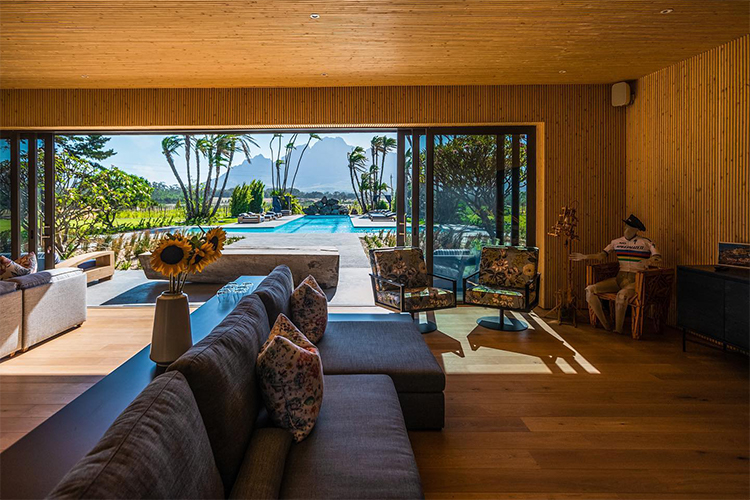 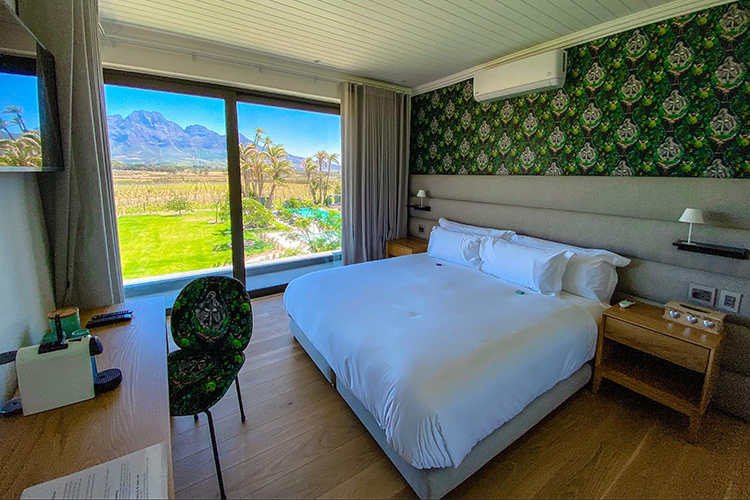 Uncover more of the Cape’s hidden gems – subscribe to our weekly newsletter. 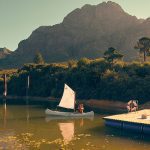 Camp Canoe: A Glamping Escape on a Franschhoek Wine Farm 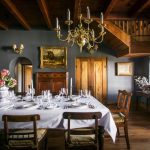 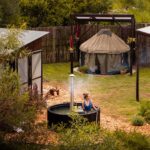 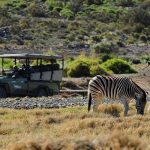